GROSSE POINTE FARMS — When he’s not training for his next marathon or juggling a stepson and three young daughters, Tim Rowland can be found managing the city’s finances behind a desk on the second floor of Farms city hall.
Stepping into the role of finance director, treasurer and controller after his predecessor Debra Peck Lichtenberg took a position as finance director of Royal Oak, Rowland’s first day on the job was June 1.
“I think we really are fortunate, particularly in the (harsh) climate of getting really good qualified finance directors in Michigan,” City Manager Shane Reeside said before council unanimously approved Rowland’s appointment last Monday. “It’s a problem for communities. It’s a problem I hear from my colleagues. We are very fortunate that we were able to persuade Tim to leave Huntington Woods and come to Grosse Pointe Farms.” 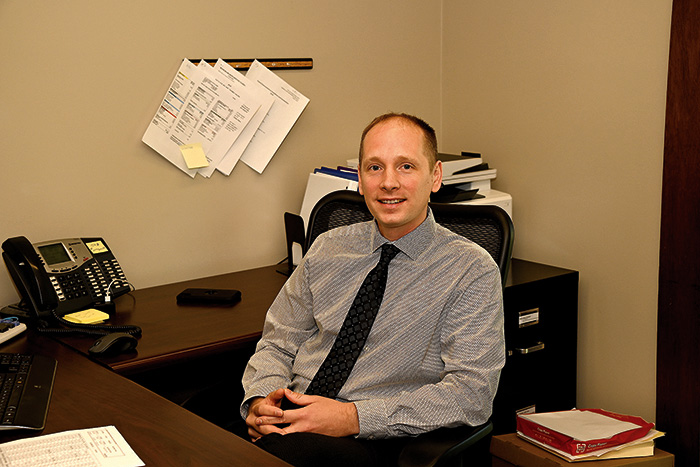 With a degree in finance from Oakland University, Rowland started his career interning in Birmingham where he worked his way up to finance assistant. During the last seven years, he served in Huntington Woods as deputy finance director, deputy treasurer and, most recently, as finance director.
“When I was going to school, I never thought I would be in government,” Rowland said. “… I always thought I would be in financial advising or stock market type (work). But then my last semester of college, I was looking for an internship and I reached out to Birmingham and sent them my resume. They said, ‘Well, we don’t have anything now, but we’ll keep you on file.’ So I thought, ‘Yeah, I’ll never hear anything from them.’ And then it was like three months later they called me.
“I just fell in love with the government (work) and stuck with that,” he added.
It was connections to the Grosse Pointes that brought him to the Farms.
Past public safety director of the Woods, Andrew Pazuchowski, was police chief in Huntington Woods, while Mark Wollenweber, who served as city manager in the Shores and city administrator in the Woods, also spent time as interim manager of Huntington Woods. Their recommendations so far have proved true, Rowland said of his first weeks in the position.
The differences in size of the two cities are a strength Rowland brings to the Farms. As the Huntington Woods finance department only consists of two people, he has experience working in every area and wearing many hats.
“It’s a smaller scale, but you’re involved in everything and now here it’s a little bigger of a scale, but I bring that experience of having touched a lot of different areas,” he said.
The Farms has earned the Government Finance Officers Association award for its annual audit the last 28 years and for its popular financial reporting the last 10 years. However, city administration has never applied to receive a GFOA award for its budget, a goal Rowland hopes to achieve once he gets acclimated.
“They call it the triple crown if we get all three,” he said, “and only a couple cities get all three, so to be one of those would be the goal.”
Rowland and his wife, Chinyere, have a 19-year-old son and daughters — each a year apart nearly to the day — ages 6, 7 and 8 years old. The couple will celebrate their 10th anniversary next month.