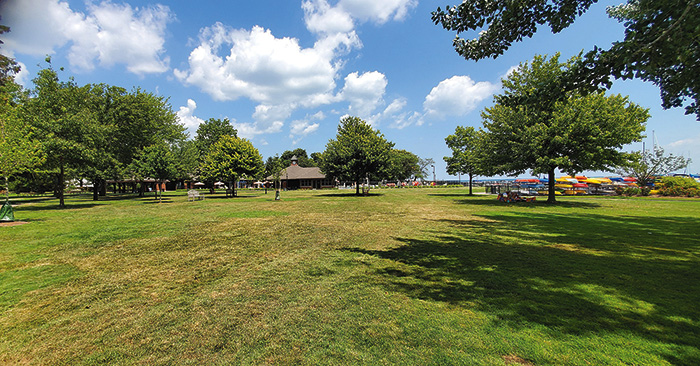 CITY OF GROSSE POINTE — While holiday light tours, a board game cupboard at Neff Park and a spring flower swap may be among coming expanded parks and recreation programming in the City, those in charge of implementation are aware pickleball is at the top of the community’s wish list.
The lack of space to build new facilities makes for a complicated issue to solve. Of the two most likely paths forward, city consensus seems to be leaning toward allowing pickleball on its platform tennis courts at Elworthy Field with an increased fee in membership to alleviate increased maintenance costs. The other option would be to tape out for pickleball usage one of the regular tennis courts at Elworthy, which are owned by and would require the approval of the school district.
“Once (city staff) have come to an agreement, then it will go to council and hopefully get approved by them,” Parks and Rec Coordinator Rebecca Jenzen said of the efforts to bring more accessible pickleball to residents.
For those looking for an immediate place to play pickleball in the City, the Neighborhood Club offers weekday drop-in play times for non-members at its pickleball courts.
Of the nearly 20 additional programming ideas put forth for consideration — many geared toward adults and seniors as the City’s demographics are shifting toward an older population — those that could be implemented as soon as this year include a board game cupboard for families to borrow or swap out games; expanded outdoor game checkouts such as cornhole, bocce ball and badminton; and educational plants, birds and stars talks.
“(One) big thing for me when coming up with the ideas was utilizing our park that we have to the greatest potential,” Jenzen said. “We have amazing natural resources down here like the different trees, the different plants. One of my favorite things … is when the birds are migrating and you get to see these awesome different birds around. In the winter, especially, we see the bald eagles that are around here flying over all the time. … I think it would be great for the youth and adults in Grosse Pointe to understand what natural resources we have down here in the park.”
Also soon to be implemented, Chalk the Park Walks, where squares of sidewalk will be numbered for people to sign up and use as a sidewalk chalk canvas, currently are intended to begin next summer.
Making use of the large green space at Neff Park, which Jenzen said is largely unused, was the inspiration behind programming ideas such as outdoor yoga or art classes in the park.
Others include a spring flower swap, first-aid classes, tie-dying at the park, themed pavilion events and meeting Santa at the park, as well as potential collaborations with the other Pointe communities for a self-guided holiday light tour and an annual outdoor battle of the bands.
A potential partnership with the Grosse Pointe Public Library could pave the way for a concept called Library Storybook Strolls, where pages of a book would be presented on signs throughout the park and paired with a live-action character from the book and relevant craft.
“I would love to get to a place where I can implement as many of them as possible,” Jenzen said.
While logistics would be more complicated for the final two ideas, their creativity spans a Santa for Seniors concept, where Santa could visit seniors in their homes, and a Sailing at Sunset concept, which could be a joint project with the Grosse Pointe Boat Club where volunteers would offer short rides around the lake to residents who don’t own a boat.
“It’s a wonderful opportunity for people who may not have the resources to have a boat to enjoy the lake in a different way,” Jenzen said.