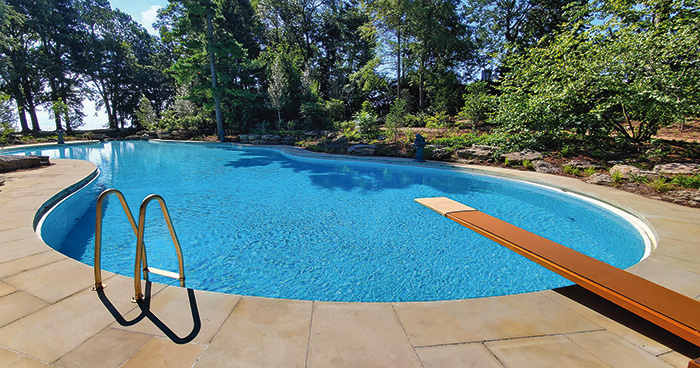 Photos by Renee Landuyt
Renovations to the pool, above, and lagoon, right, at Ford House were revealed during a VIP ceremony Monday morning. 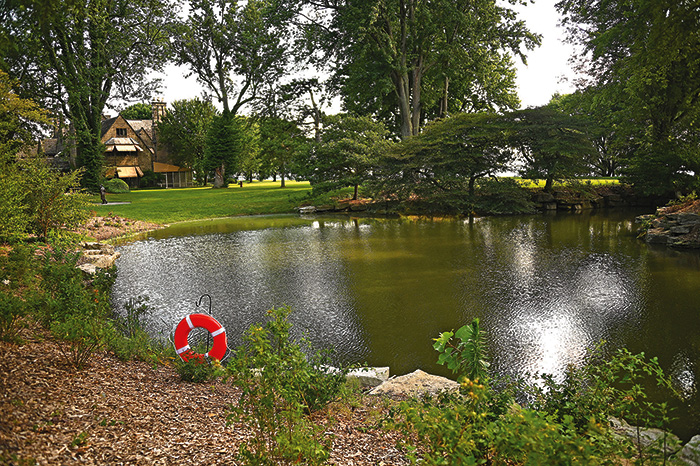 The Edsel & Eleanor Ford House in Grosse Pointe Shores continues making strides in its restoration efforts, this week unveiling a newly restored pool and lagoon on the estate’s grounds.
Both features originated with the rest of the estate in 1926, and were the efforts of landscape architect Jens Jensen and architect Albert Kahn. They designed the area to feel like the woods of northern Michigan with native shrubs and trees, while maintaining a view of Lake St. Clair. Over the years, however, the landscaping has become overgrown and the pool developed irreparable leaks since its installation more than 90 years ago.
The team at Ford House, with help from Albert Kahn Associates, collaborated on the effort to reconstruct the pool and restore the area to its 1930s glory.
“Our timeframe was the 12 to 15 years of when the family lived here and used (the pool),” said Karl Koto, Ford House director of landscapes and project manager. “… While the family lived here, they made alterations. The deck changed. The diving board changed. So every step of the project, we would look and make choices of what we wanted to restore. It was quite a process. We would have lively conversations about what the design would include and what we’d leave out. 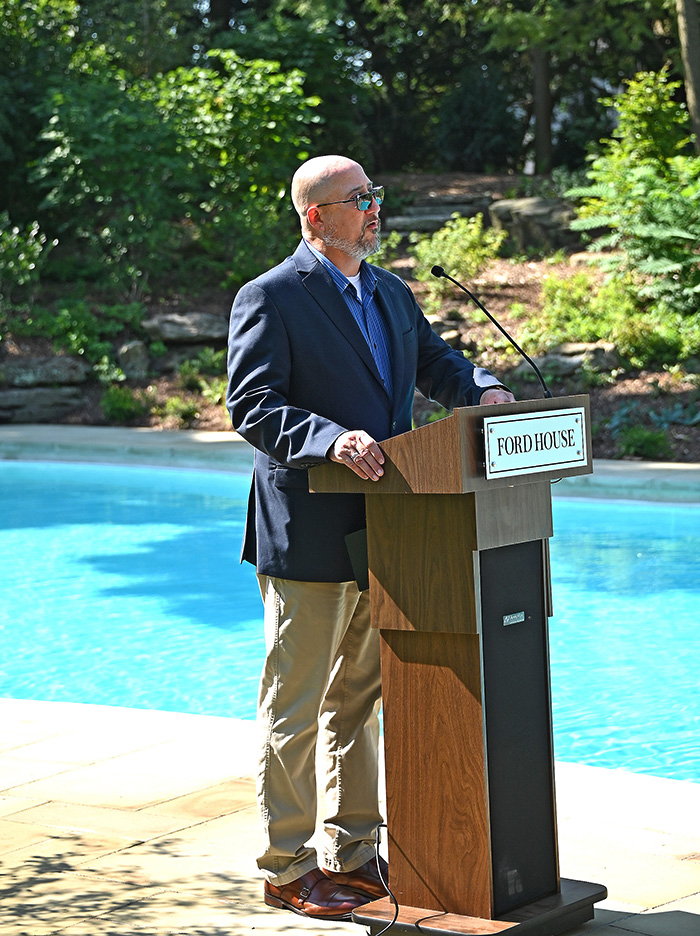 Mark Heppner, president and CEO of Ford House, addresses guests during the unveiling.

Today, this is a pool Edsel and Eleanor and the family would recognize as their own.”
Using historic records and modern engineering, the team spent three years designing, researching, demolishing and rebuilding the 185,000-gallon, kidney-shaped pool. Albert Kahn Associates applied new technologies to implement significant rehabilitation of the swimming pool’s structural integrity, plumbing and mechanical systems.
“We had to make it look like the photography from the 1930s, but use modern technology and construction techniques to make it last for another 100 years,” said Stephen White, principal and director of landscape architecture and urban design for Albert Kahn Associates.
To achieve historical accuracy, the architects relied on Ford House’s extensive archives and team of researchers. They were able to reference the original plans, architectural drawings, historical photographs, family films and other historical records.
“From family letters, stories, home movies and photographs, we know this was an important area for the Ford family,” said Mark J. Heppner, president and CEO of Ford House. “It was a special area that created fond memories and years of enjoyment.” 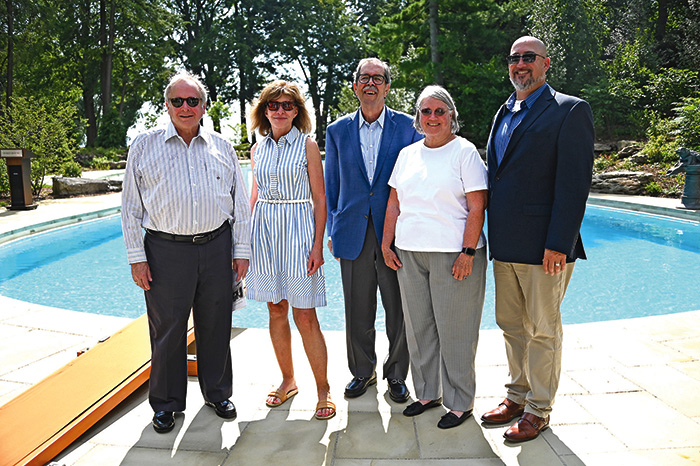 “Over decades things change and you lose the hands of Jens Jensen,” White noted. “One hurdle was the pool — the condition it was in, the quality. Was it worth the restoration? If we put in the energy, would it last another cycle?
“… The underlying theme here is restoration; this is not a fresh new design,” he added. “We had to research hundreds of photographs to reestablish Jens Jensen’s work.”
One detail not overlooked is the new diving board, a replica of the Fords’ 1936 diving board, custom designed by Jensen and created by A.G. Spaulding. It was the fourth or fifth diving board the family owned and is made of Douglas fir.
“We have access to the shop drawings,” said Rebecca Torsell, director of historic preservation at Ford House, noting the replica is based on the original dimensions, color and fabric.
The replica board was created by Mikel Tube, a vendor in Belgium and “the only one person left in the world who still makes wooden diving boards,” Torsell said.
In addition to the pool, the lagoon also was restored to its look some 90 years ago.
“The lagoon originally opened to the lake, but by the late ‘30s it was closed off,” Koto said, noting that erosion occurred over the years. “The whole slope was armored with rocks and broken concrete. The slope was altered. The contractor reshaped the lagoon to reflect its original shape and reset all the stones.” 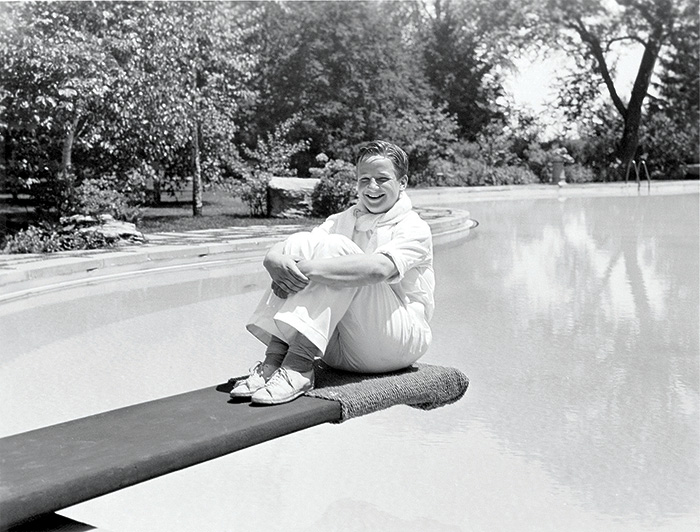 Photo courtesy of Ford House
Benson Ford gets comfortable on the diving board in a photo from the Ford House archives.

Guided onsite by a historical photo on an iPad, the contractor set boulders in their original positions.
“We tried to recreate the photo as close as we could get it,” Koto said.
The lagoon was dredged, pipes were replaced and the grassy perimeter was restored. Organic and plant matter were manicured or removed to reveal once-lost stone pathways, sightlines to the lake and rock outcroppings.
“Before the restoration, the landscape behind the pool had become overgrown,” White explained. “It lost its hierarchy, the diversity of material and the layering that were meant to replicate a northern Michigan landscape. The landscape had lost its character, but we were able to bring it back.”
Collaboration was key to the project, with members of Ford House and Albert Kahn Associates happy with the cooperative nature of the undertaking.
“It’s always a unique experience to work on a project of Albert Kahn’s,” White said. “This is a legacy project and a legacy relationship with the Ford family. It’s an honor for them to trust us to be involved. 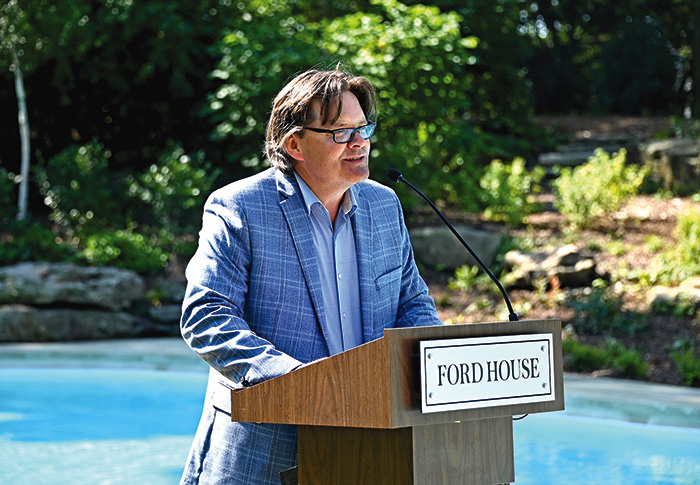 “I’m very excited about it,” he added. “I hope everybody feels the same.”
“I’m really proud of what the entire team was able to accomplish,” Koto said. “This project spanned the entire Ford House — collections, historic preservation, education. Everybody played a role. With the architects and engineers, it was a collaborative effort. Without it, we wouldn’t have been able to create something as elaborate as this.”
The pool and lagoon renovation are the latest pieces of a longterm plan to bring Ford House back to its original beauty.
“We have a lot of projects we’re looking at within 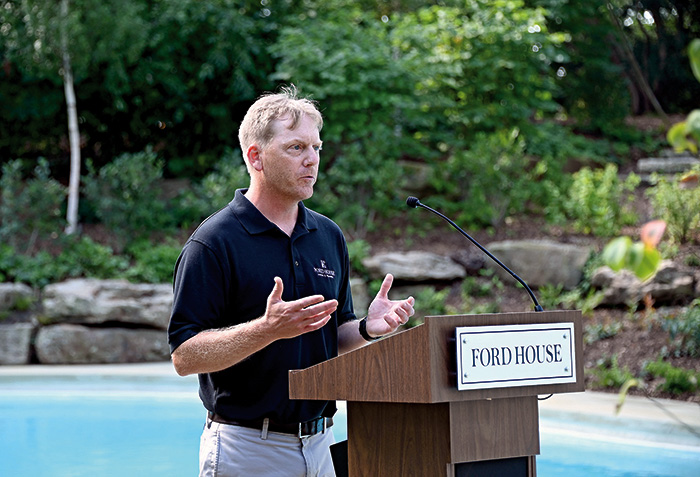 our 10-year master plan,” Koto said. “I think we’ll take a breather for the rest of the year, look at next year and what makes sense financially and functionally. There will be more restoration.”
“Preservation comes off as an easy concept, but really it’s very difficult to accomplish,” Torsell added. “Anytime you undertake preservation or restoration on this estate, it’s always a challenge. We did our best to bring you back in time.”
Now that the pool and lagoon restoration are complete, visitors may experience the area when they come to Ford House for a tour, grounds and garden walk or other event; however, swimming is not allowed in the historic pool.
Ford House will host a poolside party at 7 p.m. Thursday, Aug. 4, featuring music, light hors d’oeuvres and cocktails. Admission is $60 for the public, $45 for members, and includes one drink ticket. A cash bar also will be available. Tickets may be purchased at fordhouse.org/events.
“We were charged by Eleanor to be stewards of this beautiful estate,” Torsell said. “We are and always will be, as Eleanor noted in her will, an authentic witness to the past.”
Added Heppner, “As stewards of a National Historic Landmark, this is an important piece of Ford House’s mission to preserve and restore the physical fabric of this estate. We’re excited to turn back the clock so that visitors will now be able to experience the pool, lagoon, landscape and lake views as the Ford family did nine decades ago.” 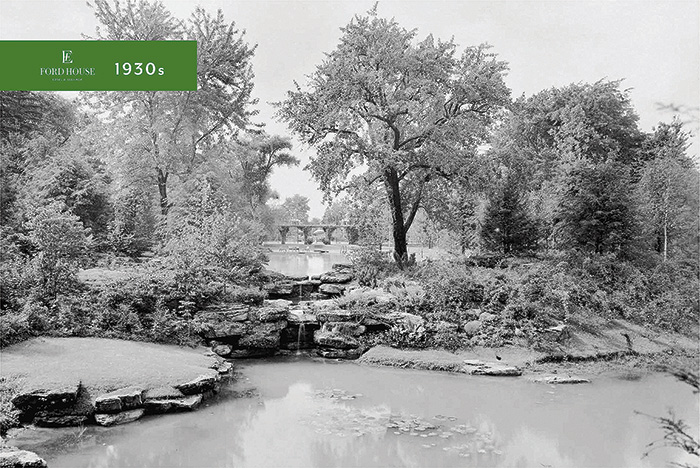 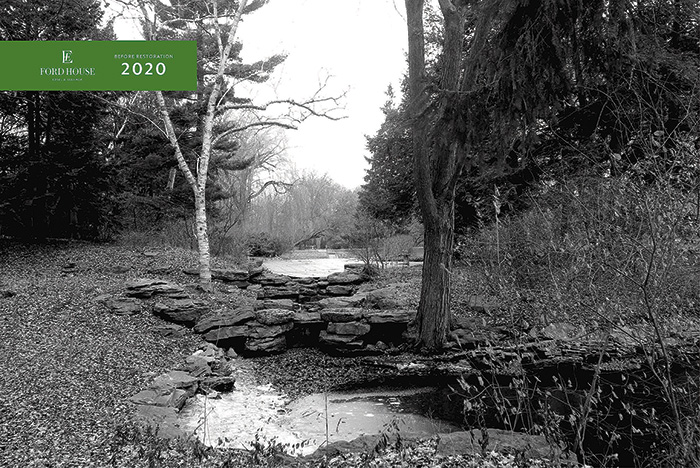 Photos of the lagoon from the 1930s, top, and from 2020, above, just before construction began. 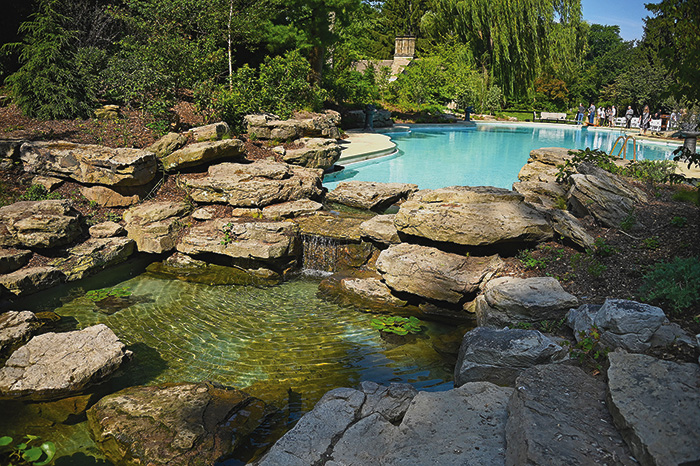 Photo by Renee Landuyt
The renovated area, where the pool and lagoon meet, includes a waterfall.