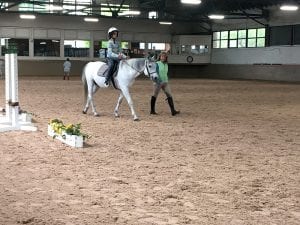 No longer dub the century-old horse-lodging and riding facility on Cook Road a “club.”

The facility’s days of polo matches and fox hunting are left to history. The pool and tennis courts have vanished to make way for riding arenas.

“We’ve been working on improvements to improve the experience for the horses and riders,” said Chad Krueger, who directs operations on behalf of his family, which purchased the facility Aug. 31, 2017.

The overhaul of every part of the barn and grounds kept Krueger and General Manager Gabe Hernandez busy. 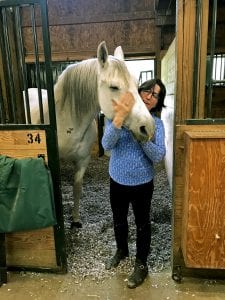 Fencing was replaced and redesigned for more paddocks, now 24 to accommodate lodgers of the 50-stall barn. This accommodates two shifts of strolling in fresh air, allowing the horses to be outdoors six hours a day.

Conversion of the hunt club’s indoor tennis court to a second indoor arena was completed in May. Construction included installation of synthetic footing to both indoor arenas. A special footing also will be installed to both outdoor arenas. The riding path along the perimeter of the property also was improved.

Lighting was replaced with LED fixtures, Krueger said, and webcams will be installed in the stalls so owners can see their horses around the clock.

In addition to functional upgrades, GPE added to its traditional hunter/jumper instruction the art of dressage by lead instructor Jesse Collins.

On May 20, GPE entered into a new community with Detroit Horse Power, the city’s urban youth program that teaches kids how to ride and care for horses.

Lessons and skills horses can teach children, according to Silver, are confidence, perseverance, empathy, self-control and responsible risk-taking.

“Traditionally we have gone pretty far outside Detroit and we’re really grateful to Lynne Krueger and her wonderful team,” Silver said. Lynne is Chad Krueger’s mom and matriarch of the GPE community.

“(The Detroit Horse Power kids) are going to do some riding, learning about horses,” said Hernandez. “They also do a facility-improvement task.” 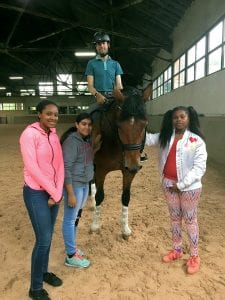 May 20 was Detroit Horse Power’s first exposure to GPE and the group’s 15th trip of its inaugural after-school program, which includes classroom teaching every Tuesday and a trip to a different horse barn every other Sunday.

The only other Wayne County horse facility the group visited was the Detroit Mounted Police facility in Palmer Park.

“Grosse Pointe Equestrian will be our closest trip and we’re very excited to get the exposure to dressage, which is something really exciting for our students to see,” said Silver prior to the event.

Since its launch in 2016, Ringside Equestrian in New Hudson has donated their horses and space for Detroit Horse Power summer camps. Silver said the organization is actively seeking a space in Detroit to build its own horse barn and grounds.

“This is the first step with a partnership with them,” said Hernandez. “The next step if we continue our partnership is they actually do a weekly program. Instead of just coming for one exploration day, they could come in weekly.”

“Yes, Ringside is a long way for them to go,” said Lynne Krueger.

The mother of 10 and grandmother of 16 has been riding most of her life, but it was late in life when she was able to own a horse.

“I started riding as soon as I could when I was little, but I didn’t have my own horse, so I had to learn to ride at the rent-a-horse places,” she explained. “And it wasn’t until I got my first job that I got my first horse.

“I applied for a job here. They didn’t hire me for some reason,” Krueger laughed.

She said she gave up riding for about 25 years while raising her family.

“Then when my youngest was old enough to come with me, I started taking kids with me,” she said. “I would take three or four and we would ride together in a lesson. Then the next day I’d take another three or four.”

Understanding the love for horses felt by the urban youth Detroit Horse Power serves, Lynne Krueger looks forward to the evolution of the new partnership.

“We’re excited because (the GPE community) is such a strong connection with the city and quite a significant number of people who don’t need to be convinced that horses are good for kids,” said Silver.