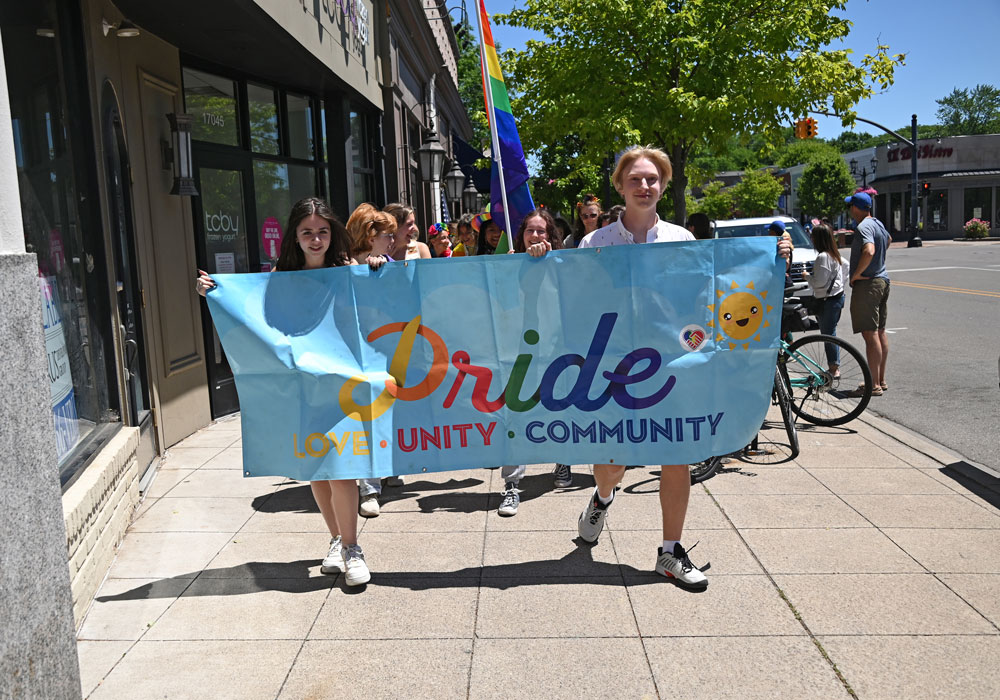 I stopped by the GP Pride event in The Village this past Saturday. I also attended the Pride parade last year. But this year’s event seemed to be much more festive — maybe thanks to the music or maybe because the street was shut down. Whatever it was, I found it to be very engaging.
When I got there, the pure fun and festivity for those attending was in full effect. Almost everyone had colorful attire on, rainbows splashed everywhere. Since I had on my usual navy polo shirt and khaki shorts, I stuck out somewhat. One of the event organizers came up and offered me beads to wear, which I gladly did, and it was fun. There was dancing, singing and lots of teens and parents celebrating each other.
After being there, I thought, “Good for the community overall.” It also struck me how important it is to have parents drive what their kids experience and engage in more open discussions than in my generation.
This group would never have been around and flourish the way it does now when I was in Grosse Pointe schools. I don’t believe one kid was “out” in all my years at South, at least beyond anyone’s own friends. No way would something like that be so public. We had rainbows, but those were usually reserved for the tie-dyed shirts that fans of Phish and the Dead wore.
I walked away thinking that things have no doubt changed for the better, with people just accepting each other. And what I thought to be most important: parents being so demonstrably accepting of their gay children.
When I left and went home that night, I thought of my fraternity brother, Fred. I was in a fraternity at NYU that was about as diverse as you could get. Asian, black, white, Jewish, Indian, southerners, Texans, Irish kids from Queens, Italians from North Jersey, business students, actors, future film directors and one openly gay brother.
When he came out to the world, it wasn’t easy for him, but we embraced him immediately. He stated to a whole room who and what he was, and the fraternity brothers just said, “Yeah, we know.”
It wasn’t terribly easy for him still, but Fred fought for his place in the fraternity and he fought for us to see him as just another brother. And we did see him, because there was one fact in his life — which was we were his one and only family and he loved us more than anything in the world.
And we loved him. All of us figuring out the world together in the middle of that amazing city.
I would stay up late at night talking to Fred while having drinks, after I could get him to stop singing show tunes. We would talk about our lives, the future and the past. I learned how Fred had one of the hardest lives growing up as I have ever heard, hard and sad. It made sense to me why we were everything to him.
I appreciated those years I knew him and I hope I made the same impressions on him.
I lost touch with him the same way many people do after college, seeing people only briefly at reunions. I was heads-down starting my career and family and he was writing plays, producing them and directing. I would follow his career and was happy for him. He was very successful off-Broadway and in film.
Fred took his life six years ago. I re-read his suicide note last night and it was as heart-wrenching as when I first read it. Like he always did, he put it all out there and made it clear how he felt about the world and how angry and sad he was. But at the end he called out his one and only family, the one place he was happy — his time in the fraternity with us. We loved and accepted him unapologetically, and he did the same.
I wish Fred had a childhood where there were more kids he knew who were out and had a family that accepted him. I am happy to see a world that is more willing to accept the children of my friends and family, should they be gay.
That is what I saw this weekend. Everyone needs support because life is hard enough, with hard-knocks coming throughout, whether its health issues or financial strain or deaths in the family. No one is immune to the human experience. Having people who pick you up and walk beside you is what life is about.
In my opinion, there is nothing more valuable than having parents who love and support their children, and accept them for exactly who they are. Just hoping they are happy. I know that is the most important thing to have and I very clearly and emphatically saw that last Saturday.
Fred’s last ask, in his words, was to donate to the Trevor Project, a suicide-prevention agency focused on LGBT youth.
For more information, go to thetrevorproject.org/